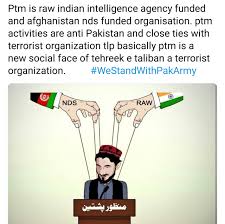 Two controversial Pakistani lawmakers, Mohsin Dawar and Ali Wazir of Pashtun Tahafuz Movement (PTM), were reportedly received by Afghanistan’s prime intelligence agency, National Directorate of Security (NDS) during their visit to Kabul. This raises eyebrow as the same intelligence agency is accused of harboring anti-Pakistan elements in Afghanistan and beyond.

According to details, Mohsin Dawar and Ali Wazir received a special protocol by NDS and other agencies upon their arrival in Kabul where they had landed to attend oath-taking ceremony of newly-elected president Ashraf Ghani.

NDS officials provided a special military helicopter to the PTM leaders, whereas, Mohsin Dawar has admitted that Ghani’s oath-taking ceremony was held up following a delay in their arrival to the presidential palace.

The members of parliament have also held a meeting with former chief of NDS, Amrullah Saleh, in a good environment in Kabul who is famous for his anti-Pakistan stance.